In 1910, the power to execute criminals was taken away from local governments and assumed by the state. On March 18, 1910, Walter Morrison, a laborer from Robeson County, became the first man to die in the state's electric chair at Central Prison. Between 1910 and 1961, the state executed another 361 persons.

All of those currently awaiting execution in North Carolina were convicted and sentenced under the state's revised capital punishment law which became effective June 1, 1977. The revised law restored the death penalty for first degree murder, which is defined as willful, deliberate and premeditated killing or killing while committing another felony. In 1983, the General Assembly gave death row inmates the option to choose death by lethal injection. In 1998, the General Assembly eliminated execution by lethal gas, making lethal injection the state's only method of execution.

The last person executed in North Carolina was Samuel Flippen, who was put to death on Aug. 18, 2006 for the murder of his 2-year-old stepdaughter.

Since the state of North Carolina assumed responsibility for capital punishment from the counties in 1910, there have been three methods to carry out executions, all at Central Prison in Raleigh.

While the electric chair was still in use as late as 1938, the state had begun using the gas chamber several years earlier. Allen Foster, sentenced to death in Hoke County for murder, became the first person put to death in the state's gas chamber on January 24, 1936.

In 1983, the General Assembly gave death row inmates the option to choose death by lethal injection. Under this provision, the warden of Central Prison must be notified in writing by the inmate at least five days before the execution that he would prefer to die by lethal injection.

Of the ten persons put to death in North Carolina between 1984 and the elimination of lethal gas in 1998, two chose execution by lethal gas. In 1994, David Lawson did not request lethal injection and became the first person in 30 years to die by lethal gas. Four years later, Ricky Lee Sanderson became the last person executed in the state's gas chamber.

A statutory amendment was signed into law October 29, 1998, eliminating execution by lethal gas and making lethal injection North Carolina's only method of execution. 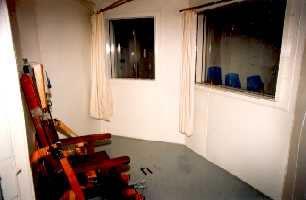 The execution chamber is an airtight compartment. A wooden chair with high back, arm rests and foot rest was mounted against the chamber's back wall. A steel door is to the left of the chair (as viewed from the witness chamber), and the control room is to the right.

The chair was equipped with a metal container beneath the seat. Cyanide was placed in this container. A metal canister on the floor under the seat was filled with sulfuric acid solution.

When executioners turn three keys in the control room, an electric switch causes the bottom of the cyanide container to open allowing the cyanide to fall into the sulfuric acid solution and produce the lethal gas. Inhalation of this gas renders the victim unconscious. Death usually occured within six to eighteen minutes.

A heart monitor attached to the inmate was read in the control room. After the warden pronounces the inmate dead, ammonia is pumped into the execution chamber to neutralize the gas. Exhaust fans then pump the inert fumes from the chamber into two scrubbers that contain water and serve as a neutralizing agent. Members of the prison staff then enter the chamber and remove the body for release to the county medical examiner.

After execution by lethal gas was eliminated by the state legislature in 1998, the wooden execution chair was removed from the chamber at Central Prison. The chair is now part of the collection at the North Carolina Museum of History and is occasionally displayed.