NASHVILLE, NC – Carefully chosen offenders began the third year of the N.C. Field Minister Program, a four-year classroom journey at Nash Correctional Institution they hope ends not only with a college degree but with an opportunity to counsel their fellow offenders, their family and friends, and perhaps those responsible for their supervision.

The College at Southeastern program kicked off with a convocation ceremony on Aug. 21 for the 70 participating offenders in the prison’s gymnasium. NCDPS Secretary Erik A. Hooks was among the keynote speakers, along with Joe Gibbs, whose Game Plan For Life ministry funds the program, and Southeastern Baptist Theological Seminary President Daniel Akin. 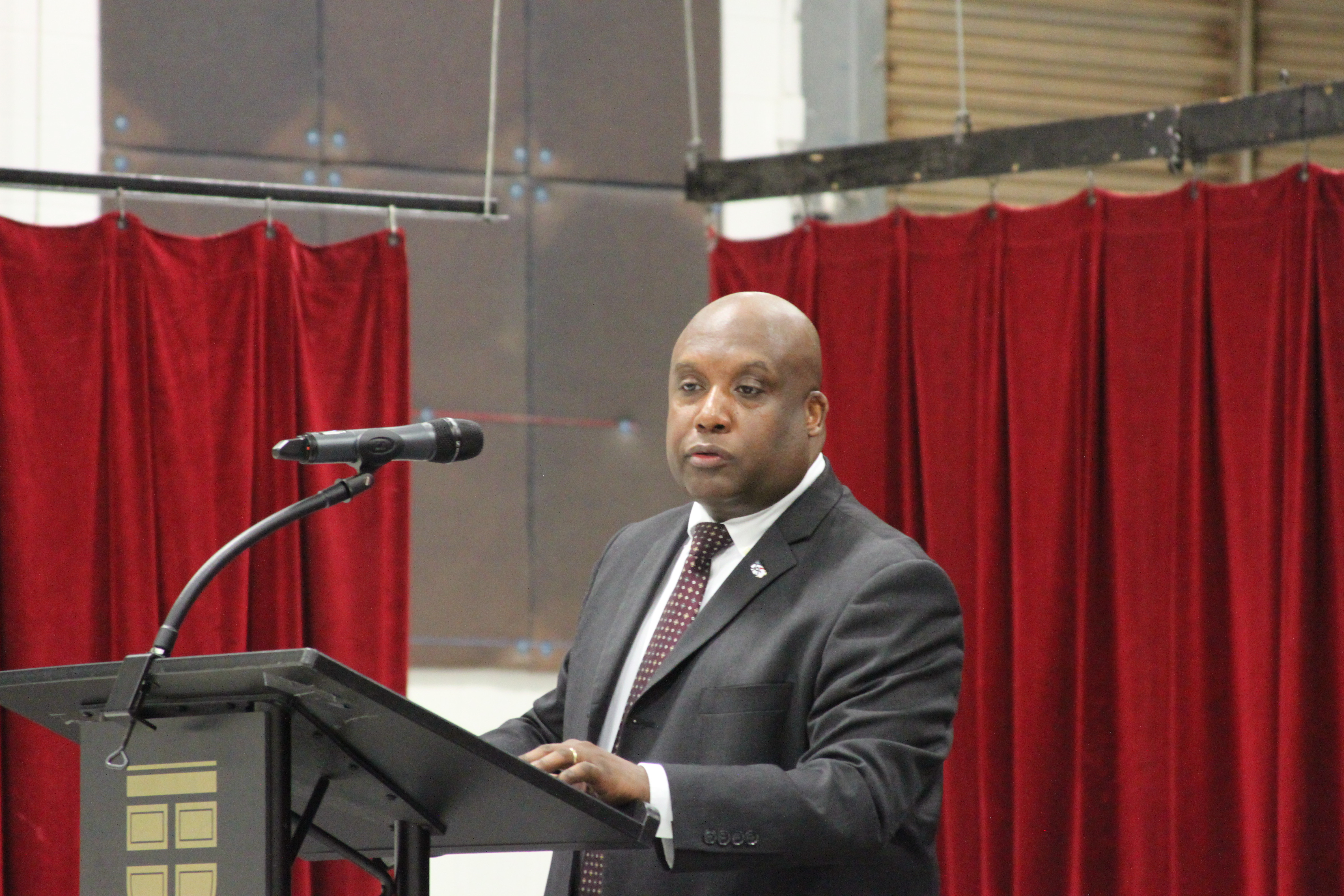 “For those of you who have boldly stepped forward to participate in this extraordinary program, I salute you,” Sec. Hooks said. “You are being educated and trained to provide peer support and counselling to others in difficult moments. You have a great opportunity to make a lasting and positive impact on the lives you touch and perhaps generations of families as offenders return to communities.”

The program is a partnership between the Department of Public Safety’s Division of Adult Correction and Juvenile Justice, Southeastern Baptist Theological Seminary of Wake Forest, and Game Plan For Life. The program is a privately-funded, four-year, college-level educational program that allows qualified and screened offenders to earn a bachelor of arts degree in pastoral ministry, with a secondary emphasis in counseling and psychology, from The College at Southeastern.

Although these classes are offered at Nash CI, this degree is the same program offered by Southeastern on its campus and is fully accredited. The classes are taught by college instructors, who teach the courses on-site.

Akin said he was excited that in May 2021, the first graduates from the program will receive their degrees. And, like students outside the prison walls who are then deployed to spread the Gospel around the world, the field ministers inside prison will “be deployed as missionaries in this mission field.”

Akin preached from the book of Romans 12, verses 1-2, where he spoke about how God works on our hearts and minds. “God radically changes us from the inside out,” Akin said. “We are shaped and transformed in the truest sense with the infallible infinitesimal Word of God.”

The purpose of the field minister program is two-fold:

The “students” were selected from offenders from around the state with long-term sentences (at least 15 years remaining on their sentences) currently housed in medium custody, with no major infractions in the past 12 months. They were moved to Nash CI after they were vetted by NCDPS, and the application process was essentially identical to that used by SEBTS in its regular application process. As many as 30 offenders will be selected each year to participate. 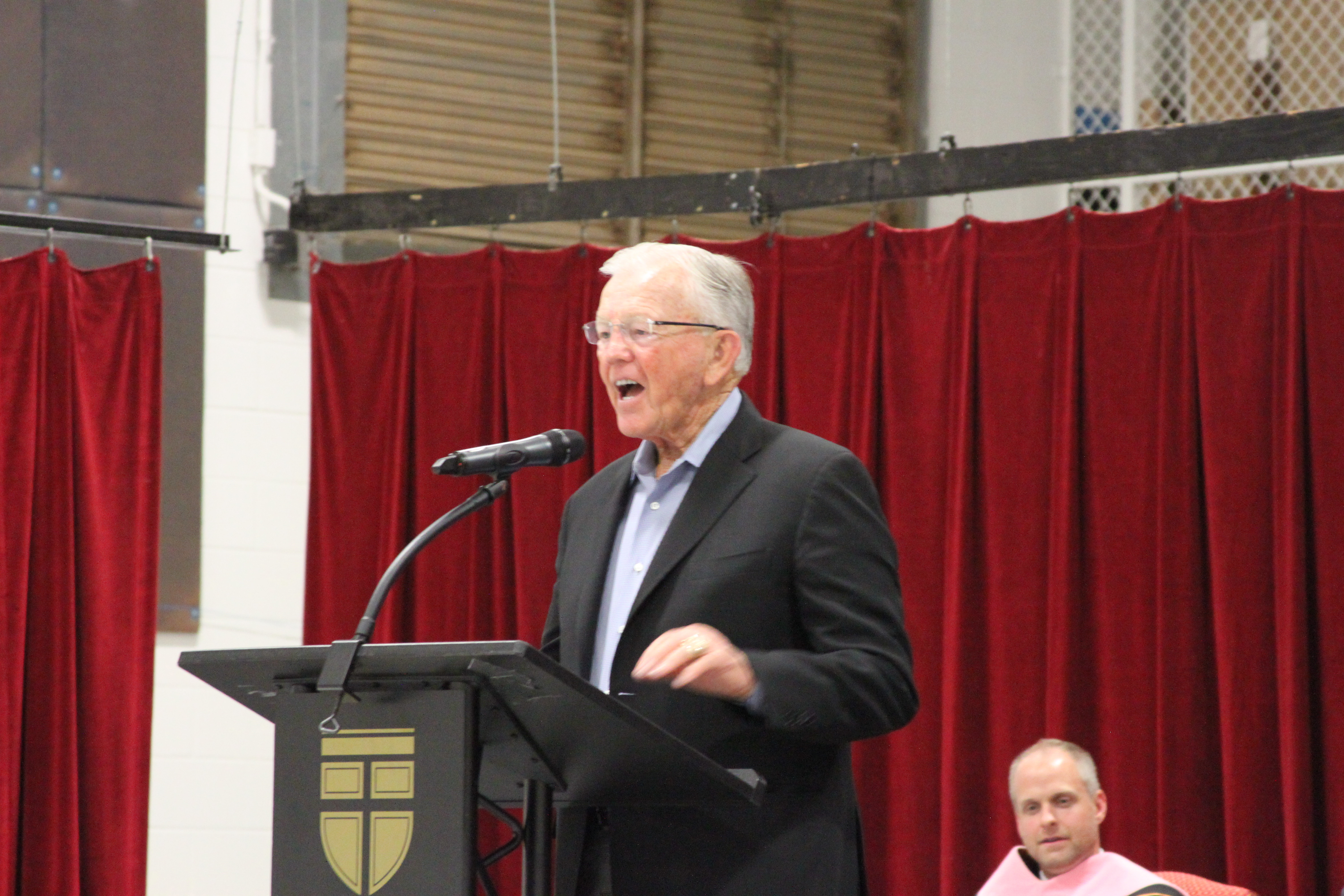 This year’s class has 20 students. Since its inception, only five students left the program due to medical or academic reasons.

Gibbs, the former Washington Redskins’ Hall of Fame head coach and current NASCAR team owner, told the men he admired their willingness to take on the hard task of not only college studies but putting their faith in God.

“We serve an all-powerful, all-knowing, all-loving God of second chances,” Gibbs said. “You need to finish strong. The end game is not here on earth. The clock is ticking on the game of life.”

Gibbs also shared a story about a correctional officer who told him that one of the participants in the program had previously made the officer want to quit. But the officer had seen a transformation in that same offender since they had been in the program.

Two offenders spoke about what the teachings have already done for them. One talked about how he sees him making a difference in his nephew’s life and helping him better navigate and make better choices. He shared that a fellow classmate was hoping to do the same thing and better guide his 16-year old daughter in her life.

The offenders also presented Gibbs with a charcoal drawing done by one of the students of Gibbs’ son, J.D. Gibbs, who ran Gibbs’ race team and passed away in January from cancer. All of the offenders signed the print.

For more information about the N.C. Field Minister Program, visit the program’s website. To view photos from the ceremony, go to the NCDPS Flickr page.