When Trooper J. L. Thorpe photographed a NC State Highway Patrol Dodge Charger one evening at the Raleigh-based training academy driving track, he didn’t expect that photo to be chosen to represent the agency in the American Association of State Troopers’ (AAST) “Best Looking Cruiser” Contest.

The photo, which features a stationary cruiser, bar lights flashing, with the orange glow of a fading sunset in the background, was one of dozens of submissions from the field that the Patrol received to select the final contest entry for North Carolina. The annual contest encourages state law enforcement agencies across the U.S. to submit a photo that uniquely represents their agency’s vehicle(s) and state. The winning photo is featured on the cover of the following year’s AAST wall calendar, while the second through thirteenth place photos will be featured on the calendar’s pages. Sales of the calendar provides educational scholarships to dependents of AAST member troopers. In 2019, the Patrol’s submission that featured the ghost car and Bell 407 helicopter won seventh place.

Trooper Thorpe took the assignment to heart and wanted to compose a shot that captured the longstanding professionalism and class of the organization. While many submissions from other states include wide-angle landscape shots or major monuments in the background of their photos, Thorpe wanted to fulfill the main purpose of the competition: showcase the Patrol’s vehicle. However, he still wanted to show it off in a cool way. 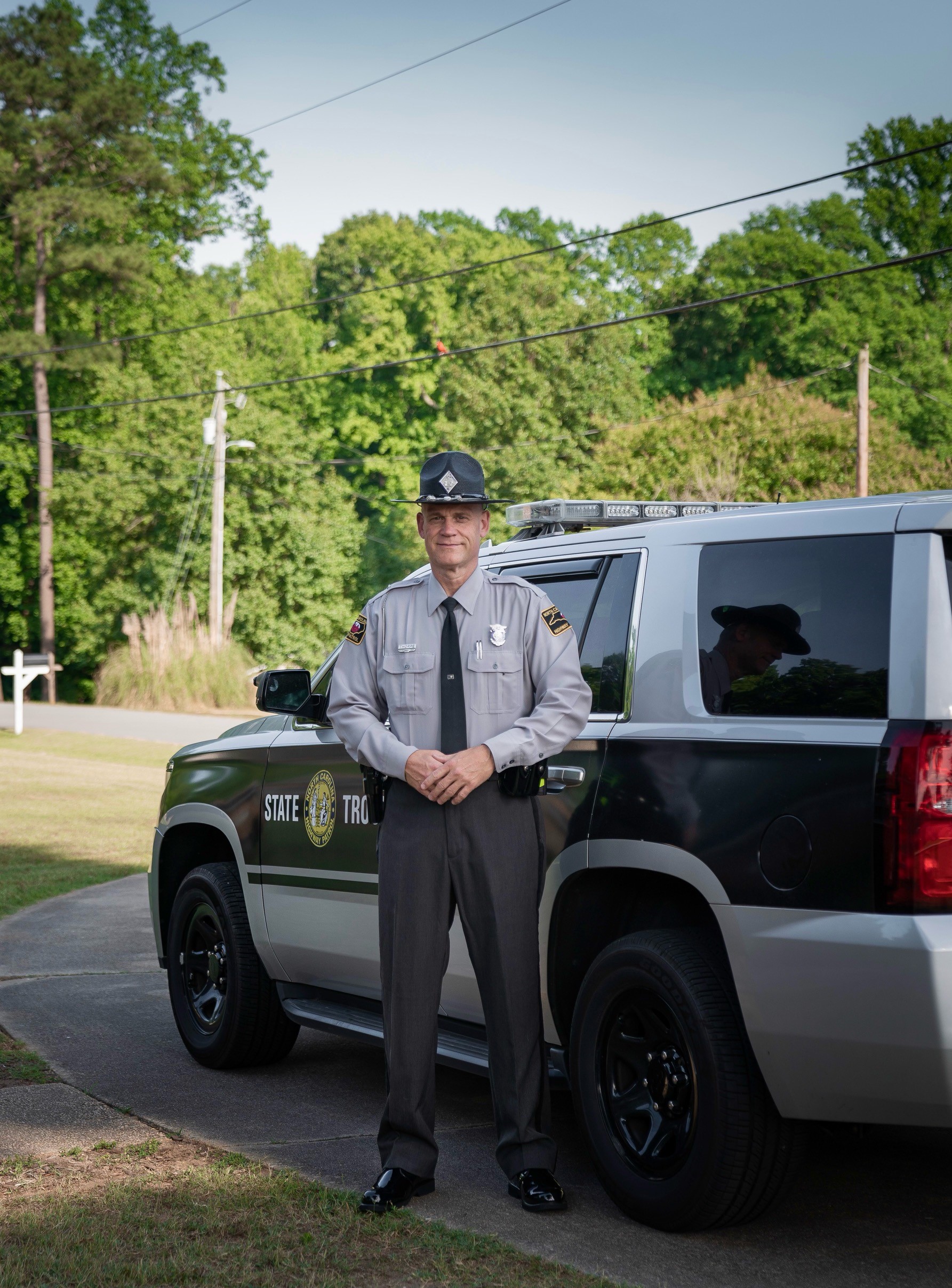 A 15-year veteran of the Patrol, Trooper Thorpe is part of the Technical Services Unit in Wake County and the lead radio programmer for VIPER. He moved to the Patrol from a career in network engineering after attending an event where a group of Patrol members influenced his next career move.

“My mom was a police officer, and I always wanted to be like her,” said Thorpe. “I attended an event where a small group of troopers were present, and I thought they were the most professional group I’ve ever seen. I decided then that I wanted to work with the Patrol.”

Trooper Thorpe’s photography hobby started around 2014, when he got his first point and shoot camera. He slowly upgraded to more advanced cameras and equipment. He has an eye for lighting and is willing to put in the time to get the perfect shot.

After parking on the track’s helicopter pad as the sun set behind the surrounding tree line, Trooper Thorpe worked quickly to get strobes set up and find the right angle. He said it only took around 25 shots to get the one he liked that had the light bar flashing, the cruiser properly lit and the right exposure to showcase the sunset.

Trooper Thorpe said he was excited and humbled by his photo being selected by his colleagues. In his opinion, the simple theme of the photo matches the overall classic look of the Patrol cruiser. Thorpe said that a NC State Highway Patrol cruiser is one of the easiest to recognize in the nation with its longstanding black and silver color scheme and has the right combination of safety and cool aesthetics. When motorists see a Patrol cruiser, they know what state they are in. This is why, he believes, people should for vote for North Carolina in the contest.

Whether or not his photo makes it into the 2022 ASST calendar, Trooper Thorpe is glad he decided to participate. He enjoys photography as a hobby, but his real passion is to document what the Patrol does by capturing professional grade photos. In his words, he is an “enthusiast of the agency” and is happy to contribute to its visual history records.

To cast your vote in AAST's "Best Looking Cruiser" Contest, go to their survey, scroll to the bottom and select North Carolina. Voting closes on August 3, 2021, at noon.