Members of the North Carolina Helo-Aquatic Rescue Team, known as NC HART, airlifted an injured hiker and his dog today from a remote area on White Oak Mountain near Mill Spring in Polk County.  The elderly man became lost in the woods yesterday evening, and Polk County rescuers searched for him all night, locating him at about 7 a.m. today.

He was injured from a fall and too weak to walk out, so local rescuers requested assistance from the NC HART program. The NC HART crew arrived and hoisted the injured hiker and his dog into the aircraft, along with four tired rescuers who had searched all night.  They flew to a nearby landing area and transferred the patient to a waiting ambulance for transport to a local hospital. 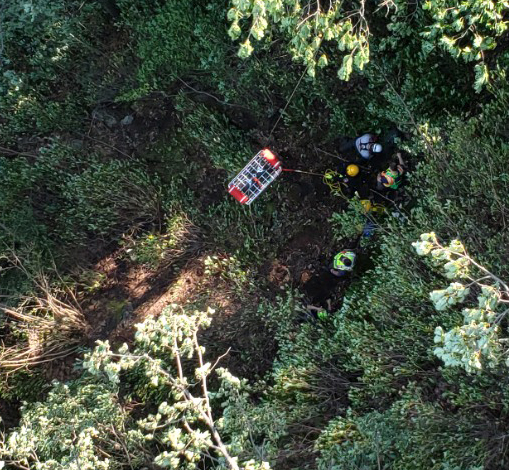 NC HART is a North Carolina Emergency Management program that pairs civilian rescuers with military and law enforcement aircraft and aircrews. Local rescue technicians complete extensive rescue training with helicopters and aircrews from the State Highway Patrol and North Carolina National Guard. On any given mission, two or three of the 60 specially-trained technicians are called upon and partnered with an aircrew to rescue stranded or injured persons. Technicians and pilots train together monthly, rotating training sites so they can practice various types of rescues: people stranded in rapidly moving water, on mountains, cliffs or waterfalls.

Established in 2004, the NC HART program was the first of its kind in the nation to implement a regimented training and response program that combines civilian and military resources. NC HART teams have made hundreds of rescues since the program’s inception.