The Dogs of NCDPS—Meet the Department’s Four-Legged Members

Many consider dogs to be “man’s best friend,” but can they also be the best coworker?

August 26 is National Dog Day, and with this unofficial holiday we’d like to recognize the many furry four-legged members within the NC Department of Public Safety (NCDPS) family. 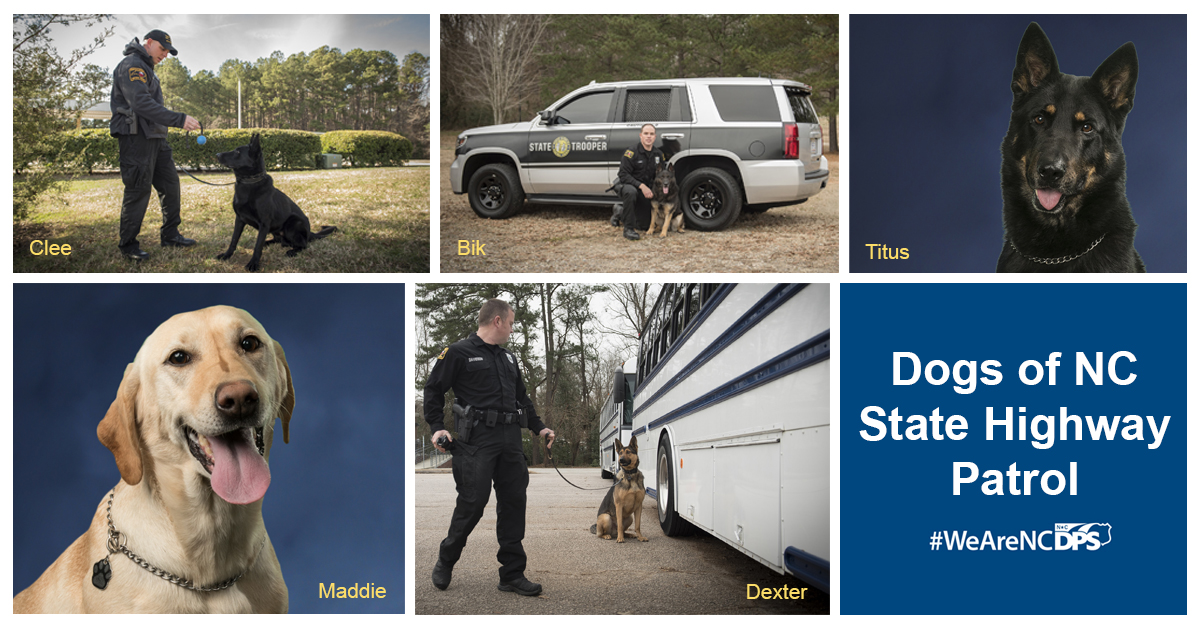 NC State Highway Patrol (NCSHP) covers more than 78,000 miles of roadways across the state and there to assist the troopers are the five Patrol K-9 members: Maddie, Dexter, Bik, Titus and Clee. These German Shepherds along with Maddie the Golden Lab are part of the interdiction units. Their sole purpose is detecting narcotics. According to First Sargent R. G. Crater, Canine Training Coordinator, the five canines are very good at their jobs.

Like many narcotics dogs, all members of the SHP K-9 unit are from certified breeders overseas. The SHP chose to purchase dogs from these law enforcement canine breeders because of the genetic quality and temperament of the dogs they offer agencies. The SHP utilizes capital from the asset forfeiture program and associated taxes to purchase “green” or untrained dogs from these breeders and train them in the states. This practice is significantly cheaper and can also help establish a deeper bond between K-9 and handler.

“This is the most rewarding program I’ve ever been a part of,” said First Sargent Crater.

K-9 members train for 13 weeks at a certified training facility in Virginia and once they receive their certification they train with their handlers (usually together or with other agencies) at least 16 hours a month. These dogs don’t just spend work hours with their handlers. Each dog is housed and cared for by their handler and a welcome family member in their households.

The same can be said for the K-9 members of the State Capitol Police.

“He wakes me up every morning,” jokes Officer C. T. James, recounting Balu’s daily routine. “He has a grin on him all the time.”

State Capitol Police has had Balu as part of their patrol family for four years. Officer James is Balu’s second handler, and he says the five-year-old explosives dog is always excited to work. 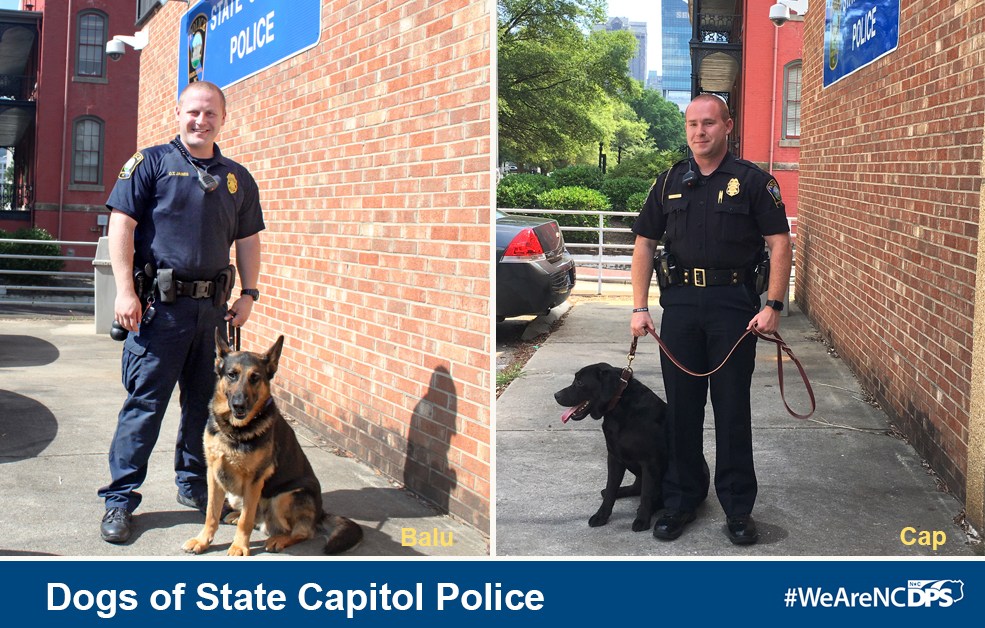 Because they assist other jurisdictions, Balu must stay on top of his game, which requires regular training sessions. Officer James says he tries to practice with Balu at least twice a month, sometimes he will even work alongside the highway patrol K-9 members. All the training comes in handy for his United States Police Canine Association (USPCA) certification, which requires explosives dogs to recognize bomb odors from a collection of scents.

In July of this year, the State Capitol Police welcomed a second explosives dog—Cap, a black Labrador Retriever—from the Czech Republic. Alongside Balu, Cap will monitor events and buildings in downtown Raleigh, as well as assist with search and rescue when called upon by outside agencies. Cap and his handler, Officer D. C. Dobson, completed a seven-week basic handler training and specialized explosive detection course and will continue to train to ensure Cap is at the top of his game whenever called upon.

The Special Operations & Intelligence Unit within Adult Correction also has welcomed new K-9 members over the last few months. Handlers were paired with four dogs—two Belgian Malinois and two German Shepherds—who are trained in narcotics detection, handler protection and tracking. These K-9 members assist their handlers, three of whom are Probation/Parole Officers and one who is a certified Adult Correction employee, with federal law enforcement and warrantless searches. These teams are based in Asheville, Greenville, Fayetteville and Raleigh, and like many NCDPS K-9s, they assist local law enforcement when called upon. 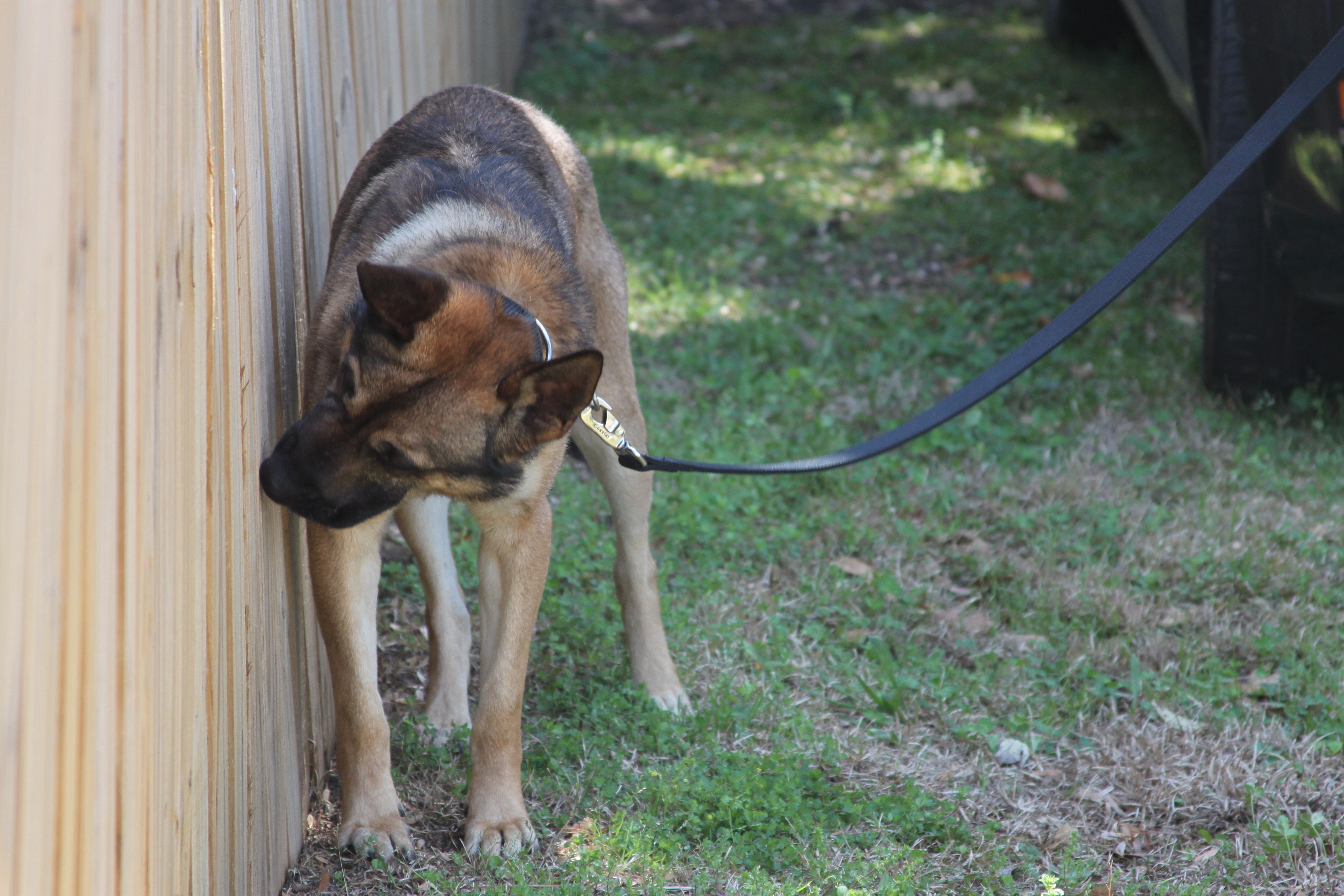 Besides K-9 members that are out on patrol, NCDPS has several four-legged friends who work within the 55 correctional facilities. The Division of Adult Correction and Juvenile Justice has about two dozen K-9 members who are responsible for detecting contraband—from narcotics to cell phones. Facility K-9s range in breeds from Bloodhounds, Lab mixes, Dutch Shepherds and Golden Labs. According to Tabor Correctional Institution K-9 Handler Edward Powers, Labradors and Lab mixes are best for cell phone detection, Dutch Shepherds are used for narcotics searches and the Bloodhounds are reserved for man tracking.

The five K-9s within the Division of Juvenile Justice have a different mission than contraband detection. The five rescues—three Great Dane/Lab mixes, one Beagle, one English Shepherd—at Stonewall Jackson Youth Development Center are part of the Pet Therapy Program, where approved students can visit with the dogs and learn basic animal care.

“Through the program, we have observed students being more kind and nurturing towards the animals, as well as a decrease in behavioral incidents, improved maturity and better impulse control,” said Pet Therapy Coordinator Missy Overton. 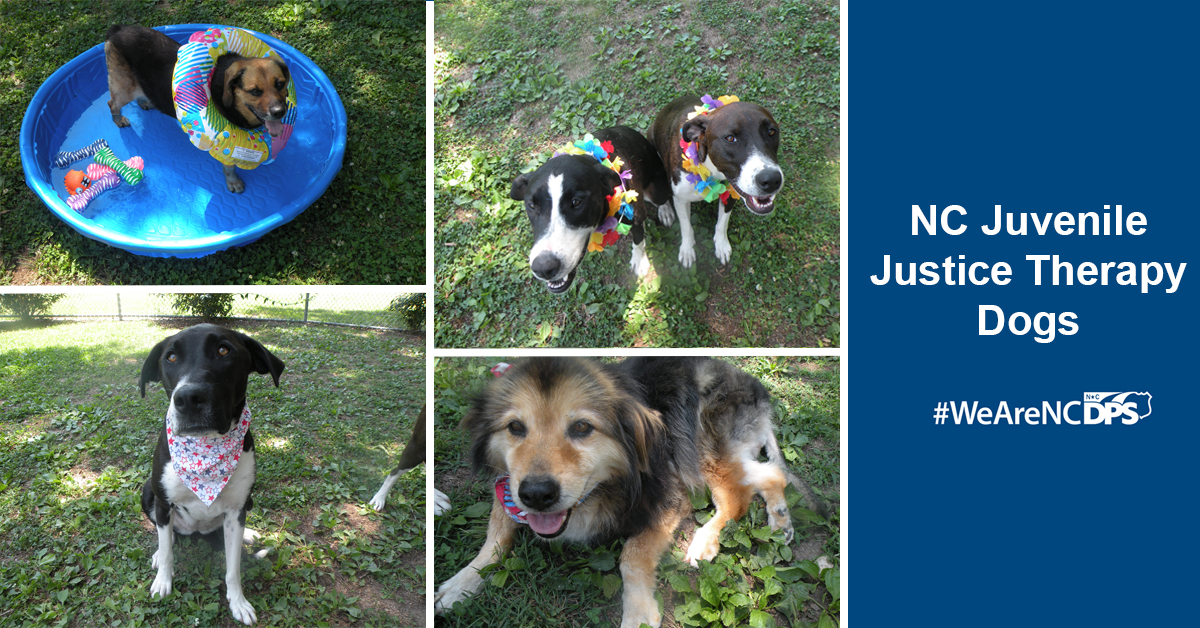 One student involved in the program wrote, “It taught me values I can use to stay out of trouble.”

No matter where NCDPS K-9s are stationed, all agree that their K-9 companions are happiest when they are working—enhancing public safety and boosting morale one tail wag at a time.