The N.C. Department of Public Safety’s mission is to safeguard and preserve the lives and property of the people of the state through prevention, protection and preparation. When it comes to severe weather, NCDPS works alongside federal, state and county agencies to ensure North Carolinians are prepared.

North Carolina experienced two winter weather events in January. The first storm took place Thursday, Jan. 15, through Monday, Jan. 17, bringing snow, ice and gusty winds to the western half of NC. Some mountain counties reported up to 12 inches of snow accumulation. The second storm brought a wintry mix primarily to the eastern portion of NC starting Friday, Jan. 21, with impacts being felt through the weekend. Some areas received half an inch of ice accumulation and low nighttime temperatures contributed to hazardous road conditions.

As the forecasts for both winter events rolled in, members of the department sprang into action to prepare their teams and align resources for response efforts once the storms arrived. Gov. Cooper declared a state of emergency before the onset of each storm to activate state resources. Essential personnel prepared to report to their duty stations across the state, ensuring facilities would be fully staffed and operations could continue with minimal interruption.

Responding to severe weather or other hazards can be an all-hands-on-deck initiative, especially when large portions of the state will be impacted. No matter their function, NCDPS employees responded accordingly in the best interest of public safety.

Correctional facilities in impacted areas were able to maintain staff levels throughout the duration of both events. None of the 55 state-operated prisons reported any issues, and Juvenile Justice facilities remained operational without incident. Some Prisons staff volunteered to work extra time or spend the night at their facility to ensure all shifts were covered in case road conditions would not allow other staff members to travel.

A Franklin Correctional Center sergeant shared his storm preparation and response experience during the January 15 storm: “I live so far away, and I knew I would not be able to make it back in for my shift. I prepared to stay and packed my food, extra clothing and water.” 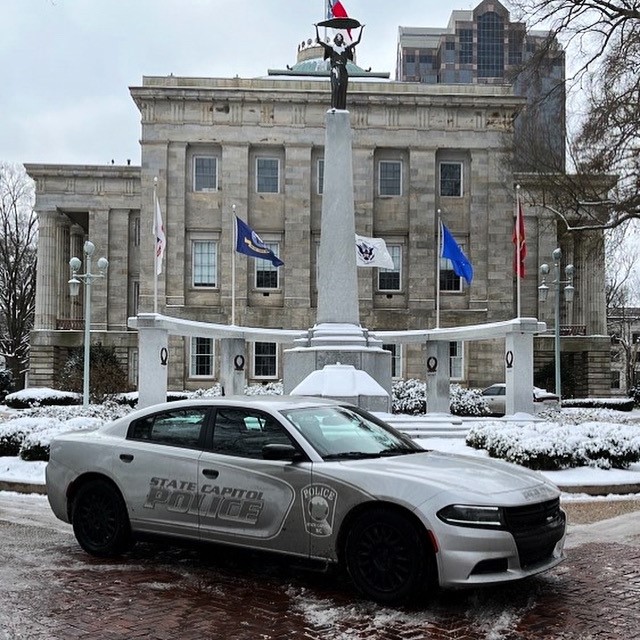 Emergency Management staff are no strangers to severe weather events. During the weeks leading up to the two winter storms, teams connected with county, nonprofit and private sector partners in preparation for power outages, shelter openings and communications needs. For the Jan. 15 storm, NCEM received and responded to 71 resource requests, many involving needs for N.C. National Guard personnel and vehicles. Power outages during this event peaked around 3 a.m. on Jan. 16 at 98,598 statewide. For the Jan. 21 storm across eastern North Carolina, NCEM responded to 30 resource requests. The highest number of power outages was recorded at 4 a.m. on Jan. 22 at just under 16,000.

The NCNG assisted with preparation and response efforts across the state during both winter events. For both storms, Gov. Cooper ordered NCNG soldiers to state active duty to support local authorities in the affected areas. Before winter weather started, soldiers and equipment like high-clearance vehicles, trucks, and four-wheel drive ambulances were staged in counties to assist with transportation-related issues.  In other locations along uphill interstate grades, NCNG heavy wrecker teams assisted SHP and N.C. Department of Transportation with towing stuck vehicles, including semi-trucks and ambulances.

Typical for any weather event, during both storms several NCDPS leaders provided updates and safety tips to the people of North Carolina during the governor’s news conferences.