When the Juvenile Justice Reinvestment Act went into effect in 2019, the Division of Juvenile Justice and Delinquency Prevention faced a new challenge. With 16- and 17-year-old offenders no longer automatically charged in the adult criminal justice system, JJDP facilities needed a new type of programming to better serve this growing population.

It was from this necessity that RISE-UP (Repair Harm, Imagine Change, Strengthen Communities, Enable Healing, Understand Others, Promote Accountability) was born. Based in principles of restorative justice, this pilot program at Edgecombe Youth Development Center is designed to equip older juvenile offenders with the skills they need to reenter their communities, repair the harm they have caused and find a better path forward.

On Nov. 9, staff at Edgecombe YDC, along with JJDP and Department of Public Safety leaders, celebrated the two-year anniversary of the program, taking an in-depth look at the practices that have made it a success.

At the center of RISE-UP is the philosophy of restorative justice. Where traditional criminal justice sees crimes as violations of the law, the restorative justice school of thought focuses on crime as a violation of people and relationships. Rather than dwelling on guilt and punishment, restorative justice emphasizes the need for offenders to take accountability, work toward repairing harm and make changes to avoid harmful behavior in the future. 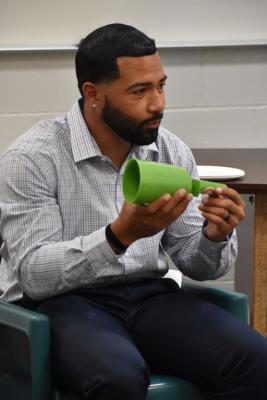 As a way of getting youth to open up and discuss these heavy topics, Edgecombe YDC uses a powerful, yet simple tool – a circle.

Guided by structured questions from a staff member and offering every youth an opportunity to share something with the group, circle sessions are designed to be a place for honesty and transparency for juveniles. If comfortable, youth have the opportunity to share their unfiltered thoughts in a safe environment, which in turn allows them to build empathy and positive relationships with each other.

“A circle is a place to talk, get to know one another and understand that these guys come from so many different backgrounds - totally different environments and lifestyles,” explained Devante Hicks, Edgecombe YDC assistant director and program manager. “What we realized is that if we can get our guys to get along, and find commonality through this interactive program, safety and security improves tremendously…They’re able to see each other as a brother, as a person, and put aside their differences.”

Staff-only circles at the facility likewise offer employees a chance to share candid feedback on how they are doing, what is going well and areas that need improvement.

At Edgecombe YDC, all youth who attend school regularly and avoid major rule violations may apply for a job in the facility. Duties can range from assisting with meal service to housekeeping, with opportunities for greater responsibilities after they’ve spent 90 days at the facility.

All the while, youth who choose to get a job are earning money, which is deposited in a savings account on their behalf. While behavioral violations can result in fines and penalties, a variety of privileges can be purchased with the money they earn. Coupled with coaching from staff, this system allows teens to learn important lessons about budgeting, personal finances and saving money.

“We felt like they needed more than the soft skills,” Edgecombe YDC Director Joe Payne said. “We have people here now who teach kids how to get dressed for an interview, how to put in an application and how to do a writing sample if an employer asks for one. This is something these kids need because they’re grown by the time they leave here.”

For youth facing no charges in the adult justice system, this adds up to the possibility of leaving Edgecombe with all the skills they need to enter the workforce, thus lowering the potential for recidivism.

The final component of RISE-UP, motivational interviewing, takes a more one-on-one approach to changing behavior. The idea is for the facilitator to engage with the juvenile as an equal partner, empowering them to think about the changes that they can make in their lives. These conversations are closely tied to the youth’s individualized service plan, which identifies their specific needs and goals for their time in custody. 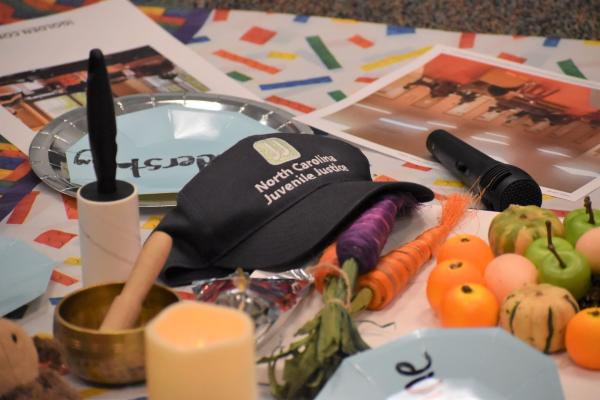 When conflict does inevitably arise in the facility, youth are also encouraged to work out their differences through facilitated dialogue. With a staff member mediating, the parties involved are encouraged to understand what lead to the problem, their role in the event, the impact of what has occurred and their obligation to repair harm done to one another.

“When we have a fight here, we don’t allow kids to just move on,” Payne said. “Now we stop. If there’s a fight, those two kids go back in their room and they don’t have any more interaction with each other until they’re ready to have a conversation – why did you do that? What was said? Why did you feel the need to hurt this other person?”

After two years of RISE-UP, Payne and Hicks agree that the program has improved life at their facility – from juvenile care and safety to staff morale and performance.

“It’s definitely a safer place than when I got here in 2017,” Hicks said. “We’ve been able to establish an increase in morale and overall daily function of what things should look like. That transparency piece is everything.”

For JJDP facilities across the state, the pilot program overall serves an example that could well set the tone for working with older juvenile offenders.

“While a circle is closed, and has a beginning and an end, it fosters openness,” Payne added. “You can’t help but be a transparent facility if you are a restorative justice facility, because everything is up for discussion here.”