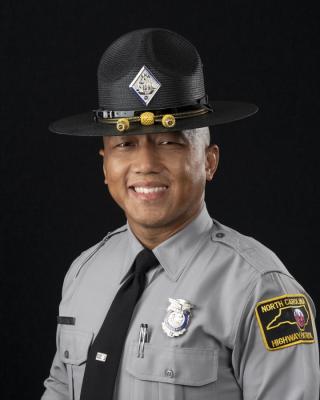 On Friday, April 8, at 12:13 a.m., the State Highway Patrol responded to a call for assistance from the Johnston County Sheriff's Office who were pursuing a vehicle traveling into Wake County. Trooper Cody E. Thao arrived in the area of the pursuit and exited onto the I-40 eastbound ramp to Rock Quarry Road. The suspect vehicle began traveling the wrong way on the exit ramp and Trp. Thao drove his patrol vehicle into the path of the suspect vehicle preventing him from entering I-40 traveling the wrong way.  Trp. Thao was evaluated by EMS on scene but did not sustain any injuries.  Trp. Thao is a one-year member of the State Highway Patrol assigned to Troop C, District 3(Wake County).

“I could not be prouder of Trp. Thao and his quick decision to stop the wrong way driver, his actions most undoubtedly saved lives,” said Colonel Freddy L. Johnson, Jr., commander of the State Highway Patrol.  “His willingness to put himself in harms way is representative of the lifesaving work our members do each day.  Placing others before ourselves is not just a saying amongst the law enforcement profession, it’s a reality of what we do for the betterment of the communities we serve.”

The suspect was identified as Joshua Ray Bibey, 26-year-old of Raleigh, NC.  He has been charged by the State Highway Patrol with driving while impaired.  He was transported to Wake Med with suspected injuries.

A video recording taken by Trp. Thao’s in car camera is being released in accordance with a superior court judge signed petition under North Carolina law.  A copy of the recording can be obtained by visiting the provided link:  https://www.flickr.com/photos/ncdps/52050810855/