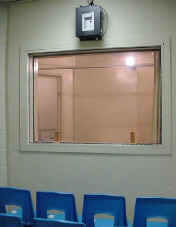 North Carolina General Statute 15-190 identifies the people who may be present at an execution. It provides that prison staff, official witnesses, members of the victim's family and representatives of the convicted felon be present.

Space limitations in the witness room restrict the number of witnesses to 16.

The statute defines the prison staff as the warden or deputy warden, or some person designated by the warden in his place and the surgeon or physician of the penitentiary.

Amendments in 1997 gave the crime victim's family the right to witness the execution. The two members of the victim's family will be recommended by the district attorney of the county of conviction.

If there is more than one victim in the capital case, the warden will ask the district attorney and/or the sheriff of the county of conviction to recommend two members from each additional victim's family.

If a victim's family does not wish to witness, the district attorney may appoint additional witnesses to fill those seats.