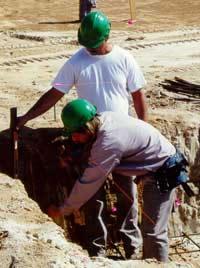 North Carolina has a long history of inmates working on public construction projects. In 1870, inmates began construction of the State Penitentiary in Raleigh. The castle-like structure, which later became known as Central Prison, was completed in December 1884.

Working under the direction of the penitentiary warden, Col. William J. Hicks, inmates completed the state's third governor's residence in 1891. The Executive Mansion in downtown Raleigh is still home to North Carolina's governor and remains one of the state's finest examples of the Queen Anne style of Victorian architecture.

Throughout the 1920s and 1930s inmate labor helped build North Carolina railroads and highways, leading to the state's nickname as the "Good Roads State."

About 200 inmates are enrolled in the program, allowing them to participate in an apprenticeships certified by the N.C. Department of Labor. Inmates work toward journeyman's certificates in various construction trades. Many graduates of the Inmate Construction Program are successfully employed in the construction industry. A few have started their own contracting businesses after their release.

Since 1993, the Inmate Construction Program has completed many projects including the following: